skip to main | skip to sidebar

This the problem with making promises.  Now I have to write today.  I said I would and there is no excuse not to.  I feel fine. I took a long walk with Sadie and our babysitter to the park, had lunch, took a long nap and now Sadie is back at the park with the sitter.

Her name is Courtney and I often refer to her as our babysitter instead of nanny because I feel that "nanny" has some socio-economic inference that we are upper, upper middle class.  We are not nor have we ever been.  I was raised by a single mom who was a teacher.  She relied solely on her parents if she needed help and they were no spring chickens.  So, we're starting to introduce her as our babysitter or sometimes even "niece" who's just helping out.

So back to our medical conditions.  That's what you want to hear, right?  Let me begin by saying that I often hear that Nathan and I are inspirations or the like to others.  However, I read the comments below before I started this entry and my heart leapt with hope.  Two individuals, "lowens" and "Staci" said that they had had the same stage IV breast cancer (bc) with the same grim diagnoses and now both are NED.  So thank you, thank you to lowens and Stac, whoever you are.

Since I have been such a terrible blogger, returner of phone callers, emails and texts, I am going to really draw the next few posts out. I'll just give a little at time.  To me, summer always has this way of being the longest and shortest season at the same time.  Trying to relax can be extremely stressful, especially when you have kids.

So let's see. Medically speaking...where did we leave off?  Ah, the last thing I revealed was that the original brain tumors had returned and they brought friends.  I believe it was twelve by the time we decided on whole brain radiation.  Besides those first couple of days of vomiting, my body adjusted very well.  Fatigue did set in quite quickly and I spent a lot of time in bed.  I didn't have the concentration to read nor the desire to, so I passively got sucked into The Food Network and HGTV.  I know they're all the rage but I could care less about cupcakes.  However,  I spent innumerable hours watching those folks bake their asses off.  And don't get me started on HGTV.

Sorry about the tangent but those were my life lines to some semblance of the outside world.  Moving right along, I brilliantly think it would be a grand idea to visit my friend Betsy at her parents' lake house in Michigan with another friend Laura two days after my last radiation treatment.  (If I can figure it out, I will add a video clip.) 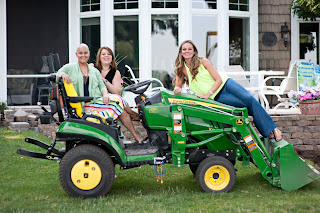 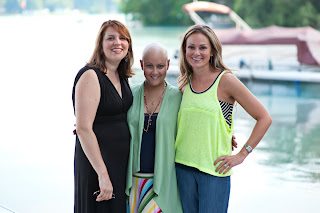 We had a great three day weekend (as you saw by the video and photos above) but I paid the price.  Immediately upon my return I got sick.  I had a terrible cough, that everyone seemed to have and claimed it lasted a really long time), fever started and I felt cold when it was 85 degrees out and I had a ton of blankets on me.  All this eventually led to almost a week in the hospital.  What a fiasco.  Details to come.

Spoiler #2- in the next chapter my biggest complaint is Nathan and Sadie's trip to Color
ado.  At least, the neuro-ophthamologist was cute!  By the way, any time I see a doctor, his/her title begins with neuro.  I think when my hair grows back, I'll have to find a neuro-hairstylist.

P.S. Thanks to Bets for getting those pictures and the video up.
P.P.S. My cognitive abilities are slightly impaired (not joking).